Like a swimmer poking her head above the surface just for a moment, to gulp the air 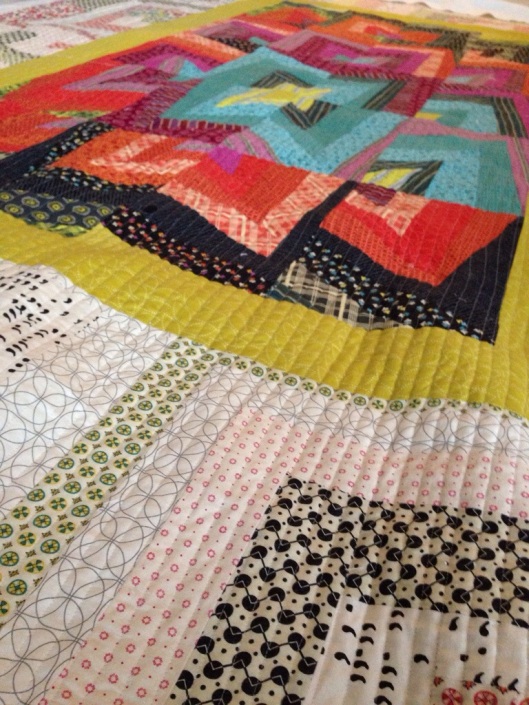 The Phoenix Twin quilts will be done tonight. I have to get them done by tomorrow so I can photograph them with Nate’s help (we’re a little stumped about how to photograph two huge quilts together) and get them mailed to Phoenix on Monday or Tuesday.

The straight-line quilting is quite time-consuming, and possibly the most boring sewing ever. It had to be done this way, though. I can’t imagine these quilts without this added level of rich, quilted texture. And, as it turns out, I really love the friends who will receive these quilts.

As fulfilling as I’ve found this project, I am ready to have it it out of my hair.

Funny, “Outta My Hair” is the colorway name of the yarn I’m using to (slowly) knit my husband’s requested socks. I’m using the free-on-Ravelry pattern Porthos. The yarn is Plucky Feet in the club colorway Outta My Hair (which I have had to beg for THREE TIMES on Ravelry, a fact I don’t think my husband truly appreciates). (Does he think the yarn just SHOWS UP in the mailbox, eh?)

I told him that only someone who really loves him would knit socks this huge, and turn a heel TWICE for him.

I’m finding that my knitting energy keeps getting redirected though; yesterday, I took Lucy to the park and she flatly refused to put her fleece North Face hat on. It was 40 degrees, and I told her she had to a) wear her hat, b) wear her hood, or c) get back in the green car and go home. She chose her choice: go home. Rather than wear the hat. That’s my stubborn kid.

On the way home I asked her, “why wouldn’t you wear the hat? It’s a NICE HAT.” Quietly, stubbornly, she said, “No it’s not.” What kind of hat will she wear? “A rainbow hat.” I’m making some mods to Jane Richmond’s Renfrew pattern, and holding double some rainbow-y Tosh Feather, and hope to have a hat to keep away the ear infections by tomorrow. 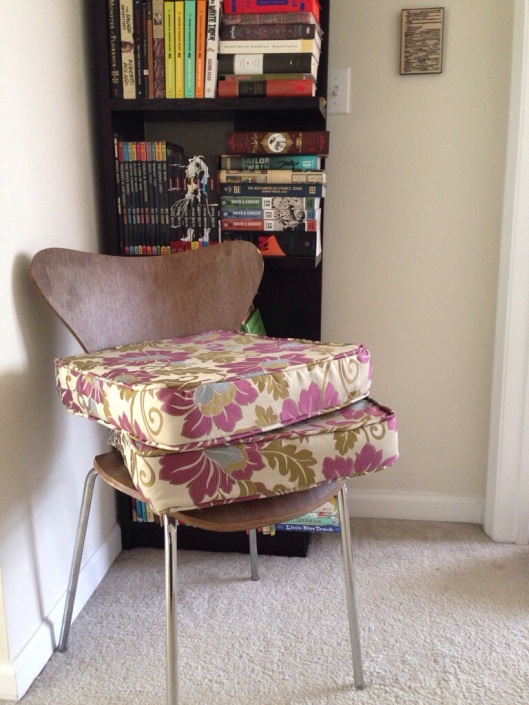 By far, though, the project that took the most love to get through was this little home-dec project I did for a friend. She bought two chairs off Craigslist and the chairs came with black pleather cushions. She didn’t like the black, so she did a Sherry-and-Jon-Petersik and spray-painted them red. But the paint ruined the texture and made the cushions smell. She would never have asked me outright to make the cushion covers, but I offered, because I knew she’d pay through the nose for custom covers on this easy little job.

She chose a poly jacquard home dec fabric from fabric.com, 3 yards. I used this tutorial on Sew Mama Sew by creative little daisy and made these two piped cushions. By far, the worst part was working with the fabric. The day after I started the project Lucy pulled a clump of greenish poly fuzz from her mouth, clearly aftermath from the cushions, and I almost barfed. But I stuck it out, and finished them. They’re not perfect, but they’re full of love.

I’ll be back VERY SOON with beauty photos of these two big quilts. Believe me–you want to see them. 🙂

I sewed the tiniest bit today and it felt good. A non-quilting friend sat with me and chatted and by the end, she was wanting to help choose and iron scraps and combine colors and prints. Spread the quilting joy ✨💕