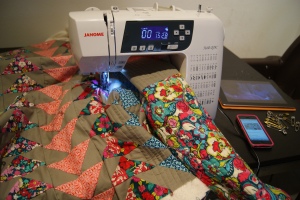 Waaay too much this. 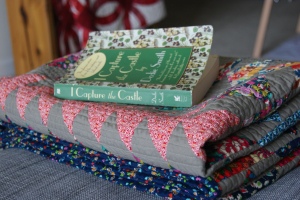 I spent four naptimes densely straight-line quilting my Liberty geese quilt, and the fifth tacking down the binding.

Thread tangent: I went to Joann’s three. times. for thread. Coats and Clark, I know, I know, but the Old Linen shade perfectly matched the Moda Dove background fabric. I told my husband that while I don’t like to cheap out on fabric-thread-yarn, I really felt like the poly C&C performed much better than any of the other threads I’ve used for machine quilting so far. Next month I may give Aurifil a shot, though it’d have to be pretty awesome to beat the ease of C&C.

Bear with me through some awful photos. The weather was appalling for the third weekend in a row, and I didn’t want to take my prized Liberty quilt out in winter mix for photographing.

You can see a peek of the backing in the very first photo, where it’s crammed in the throat of my machine. I backed it in a piece of the “Catherine” print that I bought to make myself another Tova. (Ha!) And then I pieced the last scraps of the background, and two colorways of the Charles print, and quilt back. The binding is the “Dorothy” print in navy.

Was I successful in making flying geese my own? Eh. I don’t know. I tried my hand at making something different happen in that one vertical strip, wanting the geese to look like they were rising up as a flock. You know, geese flying = order; geese taking off = chaos. I find myself not particularly caring, having wanted for so long to make a flying geese quilt. I’m also pleased with this use of my precious Liberty fabrics. (Though, shhh, I bought a FQ bundle of the brown colorway and have other plans for it.)

Linking up with the Let’s Get Acquainted Blog Hop, this week over at Better Off Thread!